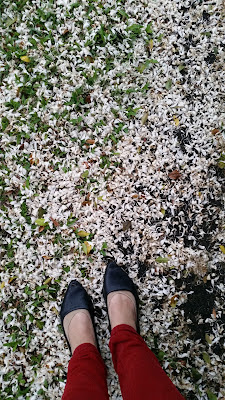 *Written over September and October. Can we take a second to reflect on how fast this year is zipping by?!*

Ah October, you little beauty. In Brisbane it's the month when the city literally bursts in flower. Jacaranda-lined streets everywhere turn purple and carpet the sidewalks while mock oranges scent the air. It's my favourite time of year, so it's been fantastic to spend hours upon hours in the garden playing with the little man.
It's also our wedding anniversary month, which just adds to that celebratory feeling as we slip towards Christmas.

However, it's also been a big month. A month of plans every weekend, big work and study schedules and a slight feeling of frantic energy to just GET EVERYTHING DONE so we can breathe. Anyone care to lie in a park and watch the clouds for a bit?

Desiring: Some more of these lovely sunny days. Two weeks of rain, locked inside with a little man going slight mental has really made us appreciate just how awesome it is to open the door and run around in the yard, head to a park with friends, stroll out with the pram before the heat of the day, or simply sit on the porch and say good night to the moon.

Loving: Mangoes. And then some more mangoes. And the rumours of a mango glut have me positively rubbing my hands together with glee.

Wearing: A well-worn pair of denim shorts and luxuriating in it! Although I am pretty mad keen on hitting the op shops soon to get me a pair of overalls. Recommendations are welcomed!

Happenings: As part of my yoga teacher training I have to log 100 classes - so I set myself a goal of getting to 60 by the end of November. I'm about 20 short of that number, so let's just say some part of everyday sees me hitting my mat, a yoga class or sitting down to meditate - although the latter may more often than not be at 6am while the child watches playschool while sitting on my lap, or knocks down his blocks nearby. That's super relaxing!

Eating: Did I mention mangoes? I'm also dabbling with intuitive eating and slowly getting back to experimenting in the kitchen again as the little man gets older and gives me a little extra time. Current favourites include this sauce and, surprisingly Sarah Wilson's slow cooked cinnamon beef from her Slow Cooker cookbook. The big challenge is finding food that is delicious, nourishing and provides us with enough leftovers to make sure the little man also has food (we're baby-led weaners here), while not costing a fortune or being too fiddly. There's only so much playdough I can hand over. And eating intuitively just makes sense after a year of eating everything in sight just to keep up with my breastfeeding appetite, and far too many coffees to deal with the sleep deprivation. A bit less caffeine, a few more veggies sounds really good!
Update: I should also mention that I'm also lucky Steve is an amazing cook and regularly takes over the kitchen while I watch on with a wine. It's a pretty great way to spend a Saturday night.

Drinking: Having said that... I'm loving loose leaf black tea, normally followed by a coffee while the child sleeps. I'm also about to break out the juicer and get some fresh veggie juices going to help us shake off the winter fug. A good wine isn't going astray either.

Hearing: Jazz, podcasts, kid's music. I'm not fussy right now. There's a slight backstory to this. About four months ago I began to notice that on the days I made a concerted effort to reduce screen time in the house, and keep the TV off completely after Jasper's nap, he was much more calm. He'd play happily after dinner and stopped screaming while going to bed. Within a few weeks he actually began to ask to go to bed when it hit bedtime. The flow on was much greater though. Because one of us normally cooks dinner while the other puts the little man to bed, we began to leave the music going while cooking and throughout dinner and we began to reconnect with each other more each night, having adult conversations that didn't revolve around stories about the kid. Then our phones started to stay away more. The nights spent on the couch playing on our phones while some mindless TV blared in the background are few and far between right now, and needless to say we've continued with this whole disconnecting to reconnect thing.

Reading: I've just returned The Good People by Hannah Kent to the library. (sidenote: have I mentioned how awesome libraries are?) It was a good page turner, it sucked me in and almost made me cry. But having said that, if you're going to read some Hannah Kent, her first book Burial Rites is the one I recommend.

Watching: I think I may be the only person who grew up in the era of The X Files and didn't watch it. What can I say, I was easily scared as a kid. Although, a good episode of Buffy was where it was at for me! So now Steve is educating me and we're making our way through the third season.

Now over to you - how has the month treated you?

Life inspired by Heidi (and in turn by Pip).