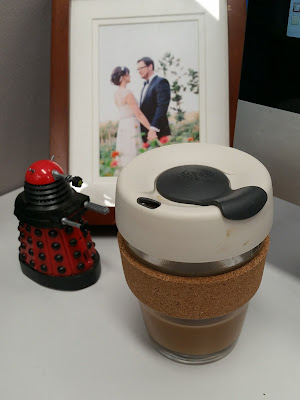 As I write this it’s July 5, aka five days into the Plastic Free July challenge.
What’s this you say? It’s a challenge currently being undertaken in more than 100 countries where people are attempting to reduce the amount of single use plastic in their lives.
No plastic bags, no plastic water bottles, no straws or cutlery or disposable coffee cups. You get the drift. Some people go the entire shebang and eliminate plastic entirely from their lives. Others tackle the smaller, more manageable challenges.
So why am I writing this?
Because I convinced Steve to take the challenge with me after we watched the ABC’s War on Waste series (side note: if you haven’t watched this, I highly recommend it. You’ll never look at a banana the same).
“We’ve got this in the (reusable) bag,” I chuffed in the days leading up to the challenge. And I honestly thought we did, because as a rule we have eliminated a lot of waste from our lives already. We’re on good terms with the farmers’ markets, we use keep cups, carry reusable cutlery and water bottles with us and have a nice swag of beeswax wraps.
But then, just four days into the challenge I realised something: we did have the challenge in the bag, with a fair few exceptions.
I walked into Coles and walked out with a roll of garbage bags, a bottle of milk and, later, walked home with bread from the local bakery in a plastic bag.
Four days in and I’d already failed.
And after telling this to Steve, and getting a nice ribbing about the bread (which to be honest was because my request for it to be in a paper bag had been too late) I realised I’m OK with these exceptions. What’s more, they don’t mean that we can’t or won’t adapt our behaviour in the future
I want to use garbage bags because I have a young child who wears at least one disposable nappy each day – mcns are expensive and something you have to slowly add to – and those dirty nappies need to go into something at the end of the day. On the whole we barely produce any rubbish, so one half full bag each week is OK with us.
Equally, we use milk. A lot of milk. And although it is possible to source this in glass, from an economical perspective this isn’t a change we’re willing to make at this point in time. That stuff is expensive! I also know we also could swap to a milk alternative that can be made at home, but again the amount of spare time you have in a day is severely reduced when you’ve got a young child. Pick your battles, I say.
FInally, I noticed that although we were refusing plastic, we are beginning to rely heavily on paper bags. Probably not the greatest swap in the long run.
But despite these failures, here are some of the wins we’ve had.

There’s another three weeks to go, so I’ll post another update next week.

In the meantime if you’re interested in learning more, head to: